A question that has come up a few times about some of our robots is, “Does this have any educational use, or is it just a toy?” I’d like to always say that it’s educational, and emphasize how kids learn through exploration and play. But I do see the other side, especially when it comes to Sphero. Sphero can be used as the amazing round robot it is with apps like Draw ‘N Drive and MacroLab, or it can be played with as an RC toy. When I’m showing kids Sphero for the first time, I start with the basic navigation to get them used to controlling it, and it’s all too easy to stop there and just roll it around the room. 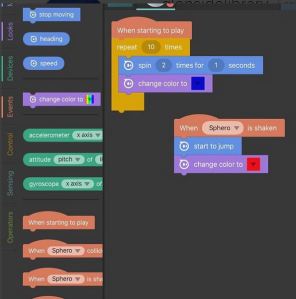 From the moment I tried out the Tickle App, I was excited by how it taps into Sphero’s potential. It has a visual interface that resembles Scratch, which many kids in my community are familiar with from school, the library’s coding club, or their own pursuits. It’s easy to get started — just drag and drop commands into place. It was so much fun I may have been a bit of a menace at first because of how fun the commands are — “Just pick it up and shake it. See what happens! What what it does when I drive it into the wall!” We’ve been pretty enthusiastic about Sphero ever since we got our hands on them, and the fact that after all this time we can discover a new app to control the basic hardware just reinforces that this is a good robot to have around.

Hello! Mindy Perry here, guest posting about Sphero 2.0. This is my 2nd year as a school librarian at Greenbrook School. We are a K-5 building and serve approximately 500 students. I’m very new into the world of robotics, although I love technology. My motto is books + tech. Sphero 2.0 is my first robotic type purchase for the library. I participated in ILEADUSA 2014 alongside Robot Test Kitchen. I LOVE LOVE LOVE LOVE what they are doing and I’m honored to be a guest blogger for this very cool site.

A robotic ball with internal leds that can be driven by any mobile device. Sphero can do tricks, is sensitive enough to dance to music being played, is waterproof and pet-proof.

It came with the Sphero 2.0 ball, charger, and necessary cords.

Price is $129.99 off of Sphero’s website. Mine was ordered through Amazon. Watch for deals on both sites. Amazon was running a sale around Christmas. Sphero had their accessories on sale through there website.

I’d say Kindergarten and up. Most people of all ages will enjoy Sphero 2.0.

I asked for Sphero 2.0 and Ollie as my Christmas present. I left the decision on which one I was going to get in the hands of my mom. I like surprises and would have been happy with either model. The kids were blown away that I would ask for a robot for Christmas just so they could get to play with it during library.

But first he needed a name. My mom told me a story about a TV show from when she was young about a robot named Tobor (Robot spelled backwards). I couldn’t resist the name so my Sphero 2.0 is now known as Tobor.

Then my brain was flooded with a million questions…..

When will the students play? Who gets to drive? What will the other students do? Where will I house the device? How will it charge during the day? How will I set up the apps on the phone? How will I teach it? My brain has a way of running away without me.

On the Nexus 7, I created a second profile so that I controlled which apps they had access to and at what times. On the homescreen, I downloaded 6 Sphero apps. I took all other apps off the homescreen because the Nexus 7’s only use at this point is to drive the Sphero ball. This minimized confusion of apps. So far so good but I’d be open to any suggestions on better management of Sphero 2.0.

So what does this look like in use at an elementary school of approximately 500 students? I chose to introduce Sphero 2.0 to grades 3-5, much to the dismay of 2nd grade. They were not pleased! Once I get a handle on all of this and the kinks are worked out, I will most likely reconsider for them. I like to jump into things, but I don’t want push myself over the deep end either. Teaching is hard enough. I spend 30 minutes with each class each week. The first 15 minutes, I teach. The last half of the class is for check out. It doesn’t take some students that long to check out so I have different activities and stations that they can do on their own until the end of class. The kids learns on their own and I’m free to help students find worthy reads. Sphero 2.0 has become an option to play with after checking out books. This not enough time! I hear groans and “we’re leaving already?!?” at the end of library. I made it very clear that they need to share the tablet amongst themselves and to problem solve who drives. I wasn’t going to create a spreadsheet on who wants to drive and who drove last. I want them to take ownership of working together without my involvement. The non-drivers for the week can build obstacle courses with the terrain park, 3 chariots, 2 covers, and 3 lbs of Lego’s I purchased.

In a few weeks I will be introducing a project that will take us to the end of the school year. I am modifying Sphero Education’s Chariot Challenge. I will be incorporating lessons on searching, notetaking, and citation into the research portion about chariots. You know, all the librarian stuff we teach. I am thrilled to introduce this project!

Student #1: The library has a robot? No way.

Student #2: You haven’t heard? Everyone’s talking about it. It’s over there……

Enough said. The library is pretty much the coolest place right now. Word spread pretty quickly, as did the amount of questions I answered in the hallway by students who had library later in the week. Tobor’s popularity even reached the middle school. My 5th graders last year found out through the library’s Instagram account.

I’m still trying to figure out if it’s my WiFi connection or the Bluetooth pairing that is causing the connection to say: “Sphero not found” occasionally. The WiFi is not the greatest in the library. It doesn’t happen every time I try to play, but enough that it is causing a little frustration. The students want to drive it, not wait around for it to connect.

Only having one Sphero 2.0 to play with between 20+ students at a time can get a little tricky. So far they’ve been good at sharing and dividing tasks, but it’s only been a week so this may change.

Not enough time to play. This has nothing to do with the robot itself, it has to do with my scheduled amount of time I have to see students each week. They get a few minutes each week and it’s just not enough. I have really excited students who just want to keep building, playing, and learning.

All I knew was that I wanted to bring a robot into the library. I had no idea what I was going to do with it or if it would be worthwhile. If you’re on the fence, take the jump. It’s warm in the water. It’s very easy to use with little setup. Just search the many apps Sphero has, download and play. Don’t worry if you think you won’t be able to figure it out. You will be able to understand a few key components of the Sphero and then hand it over to the kids. They’ll teach you.

If you are working with more than one Sphero, mark it’s bluetooth code with a sharpie. Then you’ll know which one to pair.